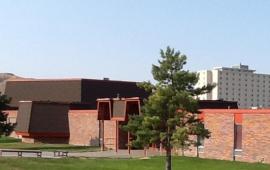 We're still waiting on a list of full results and pictures from the Nebraska State FFA Convention held in Lincoln this past week. This is Chadron High School's first year hosting an FFA Chapter in over 50 years. We excited to share some of the highlights from the State Convention.

The biggest highlight came during the Friday night banquet when it was announced that CHS sophomore, Kane Wellnitz was named the State Champion in the Junior Public Speaking contest!

We received notice this past weekend that Chadron High School has qualified a team to compete at the Finance Challenge Regional Competition in Kearney on April 19th.

Mrs. Buldler entered teams of three from her Personal Finance class. The team consisting of: Jayden Garrett, Logan Gimeson, and Logan Lembke finished in the top five of all Western Nebraska teams earning the regional berth. This statewide contest is sponsored by the Nebraska Council on Economic Education.

The Chadron High Future Leaders of America attended the annual State Leadership Conference in Omaha on April 2­5. While at the conference, students participated in a bigbusiness tour of Werner Enterprises, listened to the keynote speaker, Laymon Hicks, and attended a variety of workshops.  But most importantly, Chadron students competed amongst all class levels in many different business competitions.

Along with many hours of taking notes and studying, Mr. Bradley's Advanced Biology class opened up a world of hands-on learning activities. Not only has the class dissected crawfish, and frogs, but recently they were able to dissect a turtle. The class learned many skills during this lab, listening and following directions on a paper, teamwork, and the slow and steady hands of a scientist dissecting its specimen. The class was divided up into groups of two, each group received their own materials and turtle to dissect. The process was difficult.

The film is focussed on individualized instruction of students. We'll anxiously await the final production which will air on The State of Education in Nebraska series on NET2 this June. Videos can also be found on nelovesps.org.

Congratulations to CHS sophomore, Shoilee Rahman in her 3rd place finish at the Nebraska State Speech Meet in Kearney this week!

The Cardinal Speech Team is coached by Mr. Joe McCarty and Ms. Katy Dobry.  Congratulations to all!

We're very honored to share the announcement that our Technology Director, Eliu 'Uati' Paopao, was named the winner of the Excellence in Leading with Technology Award sponsored by the Nebraska Educational Technology Association.

The purpose of the Excellence in Leading with Technology Award is to recognize and honor an individual who has demonstrated outstanding achievement in implementing technology to improve teaching, learning, or administration.

Basic Nursing is one of our dual-credit courses through WNCC taught by Nicole Pourier. Every year during a patient-care unit, students practice feeding patients with disabilities. Our CHS staff volunteer to serve as patients, each with a specific physical or mental disorder.

The Chadron Speech Team placed 4th at the B6 District speech contest on March 20th in Gering. Three Cardinals have qualified to compete in the State event next week in Kearney.

Congratulations to the entire speech team and good luck at State!!!

Tis The Season To Be ..Testing!

The testing season is upon us. At the high school level, testing is done with multiple exams for every freshman, sophomore, and junior. Seniors have no required tests, although many take ACT tests in final preparation for college.

The New Marquee Is Being Installed!

Congratulations to the CHS Speech Team who are the 2014 Western Conference Runner-Up!  This is the highest finish at the conference meet in many years.

Placing for the Cardinals:

Bird Feeders
Ever wonder how to attract birds to your back yard?  The wildlife science class during their bird unit designed an experiment to determine just that.  The class created five types of feeders to be tested.

Oil spills and the effects on birds

On behalf of Chadron High School, I want to humbly thank several local businesses that surprised us Monday afternoon with a donation that will support our high school pep band travel to Lincoln for the Girl's State Basketball Tournament.

Congratulations to the Lady Cardinal Basketball Team for their district championship and automatic qualifier to the Nebraska State Basketball Tournament!

They'll play Pierce this Thursday at 1:00mst at the Devaney Sports Center in Lincoln.